Review: A Comedy of Terrors by Graeme Smith 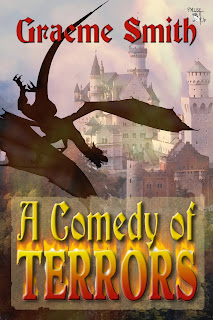 Quick Review:
Segorian Anderson’s an Idiot. But that’s fine with him. It’s a well paying job with no heavy lifting.
Nobody ever remembers Segorian. It isn’t magic - he just has the sort of face his own mother could forget, and she’s been trying to for years. But being forgettable is a job requirement for an Idiot.No, he's not the Court Jester. He doesn’t wear motley (whatever motley may be). That's a different union. He’s the Idiot. In a Queen’s castle, wine spilt down the wrong dress can lead to war, so someone unimportant has to be blamed for it. That’s the Idiot’s job. He’s the Idiot that did it, for any value of ‘it’. Of course, as soon as he’s exiled-for-life out of the castle gate, he uses his back-door key and sneaks back in. But that's not all. Someday, something really bad will happen. Really, really bad. Badder than a bad thing on a very bad day with extra badness. When the world’s about to end (or the washing up won’t get done – whichever comes first), who you gonna call? No, not them. They haven’t been invented yet. You call the Idiot, someone nobody will miss if things don’t work out. And now Peladon has a case of dragon.But the dragon may be the easy part. Segorian has woman trouble, and he’s the only person in the castle who doesn’t know it. Because to Segorian, women are an open book. The problem is, he never learned to read.


Detailed Review: << review copy given by the author himself >>

I really loved this book! I found it extremely funny and comical. Especially the main character who is called Segorian Anderson, the Idiot and the grounded dragon who are about to start a wonderful journey of idiocy and quick thinking. A strange concept but it's absolutely a book that you, comedy-lovers might become hooked at reading.

I found this book to be funny and hilarious but other times just plain stupid. Somehow comedy writing has become over-rated and entirely sensual to us human beings. A Comedy of Terrors was actually quite upbringing. The story is written in a weird form, portraying a really 'dumb' mind and other times, the setting is described in detail.

Interesting and funny, the story portrayed a comical detailing of characters. I feel like this story was simple and ludicrous when the description part came in.

I prefer more 'intellectual' characters because there's more depth to the storyline instead of a bland, dry comedy.

I find a more story-building plot more exciting and comical. But of course, Graeme Smith has planned the story with such a fun 'flair' to suit and somehow make the character's personality more realistic. But it didn't really suit my style of what I like to read.

But I really appreciate the feeling of being the character and reading what they're feeling and seeing but I can't help but think that this book could do better.

But of course, all books can't suit one reader!

Soooo... just to finish up my point of reviewing, I kinda of liked it and at the same time, I had second thoughts of this book.

However based on what I've read so far I kinda wished that it was more exciting and more not-so... I don't know what to say... really... but I had a fun time reading and laughing out loud!

Brief Review: Graeme Smith has written a mixture of different forms that has comically told us a story about an idiot human being and a smart dragon. Though the story was kinda slow for me however A Comedy of Terrors has described to us a very fun and interesting story that will manage a laughter across a page!

QUOTE: Just for the 'Idiot'

"Passion makes idiots of the cleverest men,
and makes the biggest idiots clever."